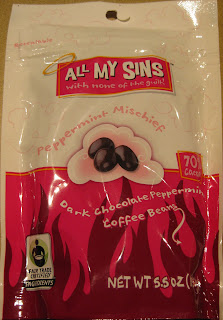 Corporate Info: Pop Quiz. Q: What's weird about All My Sins? A: The brand doesn't have a website, or any other identity as far as I can see. According to the package it's distributed by John B. Sanfilippo & Son, Inc., which according to this site filed a for trademark on the name (All My Sins With None of the Guilt) earlier this year. JBSS was founded in Illinois in 1922 and sources nuts commercially, for store generics, and as the brand Fisher. I found the All My Sins product at Whole Foods.

Today's Confection: This is All My Sins' dark chocolate item, which is why it's the one I bought! 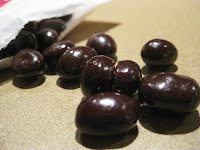 Appearance: Shiny (that'd be the confectioner's glaze) and dark.

Smell: An appealing mix of chocolate and heady roasted espresso, with a light burst of mint.

Taste: Quite nice, if more or less what you'd expect. The chocolate coating isn't too thin or thick, and it holds up with its rich texture and dark but mild flavor to the crunchy, roasty coffee beans. The mint is kind of an afterthought, but I have to admit it adds a layer of refreshment to the dark and somewhat bitter (just because it's coffee) confection. I can't wax poetic about these—they don't have the gourmet texture or complexity of, say, Pacari's chocolate covered cacao beans—but there's nothing “off” in the balance of flavors, the thickness of the coating, or the beans.

Conclusion: All My Sins Peppermint Mischief 70% Cacao Dark Chocolate Peppermint Coffee Beans are a satisfying snack for those who like their candy caffeinated or coffee with their chocolate.
at 12:00 AM