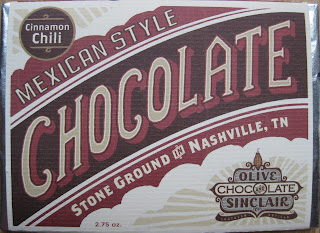 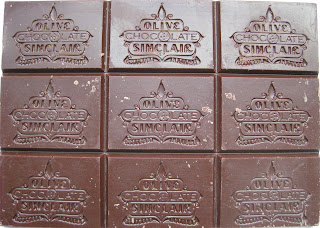 
Corporate Info: One appealing feature of Olive and Sinclair's chocolate is that the young company is small and American—in Nashville, to be specific. They make several plain and flavored bars using stone-ground beans and brown sugar, both of which are relatively uncommon (though not unheard of) in the chocolate game. I can't find anything on the bars or website about their bean sourcing and so on, but they do seem to be making an effort with certain organic ingredients (see ingredients for this bar), some well-intended environmental initiatives, and possibly a foray into fair trade (there's a blink-and-you'll-miss-it mention in this video). All in all, at this time Olive and Sinclair is a company I'm happy to support.
Appearance: Unlike the Salt & Pepper bar, the Mexican Style has the spices mixed in, so there's no photo of the speckled back of this bar. Again it's thin, flat, and sharply molded, and the color is glossy and vivid.
Smell: Fruity, something juicy like cherry or currant. Aside: I've called a lot of chocolate “fruity” lately, which either means I've eaten a lot of fruity chocolate or I have a limited olfactory palate. Probably both, though I'm working on the latter. Anyway, whether this bar is “fruity” or not, the smell is pretty pure, not roasty or sour or sweet or in-your-face, just a fresh, slightly caramelized scent.
Taste: Whereas some “Mexican” chocolate can be one- or two-note, in this bar the chocolate, cinnamon, cayenne, and salt merge with surprising complexity. It doesn't just taste like cinnamon or overwhelming spiciness but instead is infused with warmth and flavor; I wouldn't have been surprised to have seen other spices listed in the ingredients. The chocolate itself is subtly fruity with an additional, interesting sweetness, like toasted marshmallows—perhaps from the brown sugar. Texture also helps, as stone-ground beans give the chocolate a fine, uniform grittiness that makes mouthfeel and chew intriguing but not to the point of being distractingly annoying.
Conclusion: Olive and Sinclair Mexican Style Chocolate Cinnamon Chili is balanced and complex, just excellent stuff.
at 10:28 AM