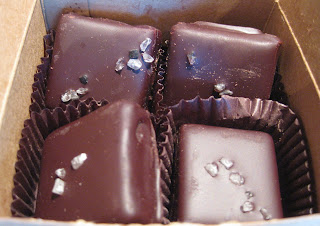 Corporate Info: I'd never heard of Portland, Oregon's Stirs the Soul until near the end of my visit to Seattle's annual Northwest Chocolate Festival. (I was only able to stay a few hours, so I expect to discuss the festival in related posts rather than on its own.) By that point my head was swimming: I'd seen countless thin, flat, brown rectangles and tasted many smooth, complex chocolates that were mostly running together in my mind, though I hadn't yet been blown away by anything and was actually considering going home with nothing.

Near the back of the convention floor I stopped at Stirs the Soul's undeniably hippie booth and figured it was another company that put ideology over quality chocolate...and then I had my first surprise of the afternoon. Daren Hayes comes off as a chatty, earthy-crunchy hippie, a self-taught chocolate maker (albeit one with a culinary degree) who had the good sense to hire a chocolatier or two, and they're doing interesting work. I actually liked (though not loved) the bars, which are made using organic, raw cacao, with alternative sweetners (coconut palm sugar, date sugar, agave, honey) and fairly interesting flavors like hemp and maitake mushroom, spiced chai, and orange goji. The truffles I took home aren't available on the website, but they're what blew me away, and if you're interested in the bars and other confections, you can buy them online or at one of these natural food stores.

Today's Confection: Daren had two “Pleasures” available for tasting, the Salted Chocolate and another (I think Turkish coffee, which I remember also being excellent); I overheard him saying something about them being a sort of cross between a caramel and a truffle. There's no label on the little cardboard boxes he had for sale, so I asked him for the ingredients and he rattled off what I listed above, noting that there might be one or two more that he couldn't remember. I've tasted raw chocolate in the past and used all three of the coconut ingredients he mentioned, and while I like them, I expected something fairly oily and harsh. Instead I ended up buying a box of four. 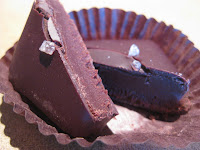 Appearance: Imperfect squares, with a very dark coating and a light, haphazard sprinkling of salt crystals and what I assume to be crushed cocoa nibs.

Smell: Not strong, but earthy, smoky, and dark.

Taste: Texture is pliable outside, very soft and slightly chewy inside, which must be the “caramel” in the caramel-truffle cross. Flavor is intense: complex, moody, dark, smoky, roasted—but not especially bitter or sour. These remind me of strong coffee and the scent of pot smoke (I'll only admit to having attended concerts as a teenager, and eventually learning what I was smelling around me), with the salt crystals majorly punching up the flavor halfway through chewing. I have no idea what fine European-style chocolatiers would think, as the texture, intensity, and smokiness are a long way from many super-creamy, mild truffles and sweet, buttery caramels, but I could eat one of these daily and always feel impressed and satisfied. I wish I had more.

Conclusion: Stirs the Soul Salted Chocolate Pleasures' hippie pedigree and culinary aspirations make them an intense, satisfying surprise.
at 12:00 AM