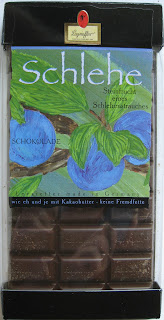 Today's Bar: Sloe...? Before I did a little research, I knew basically nothing about sloe except for the vaguely familiar phrase “sloe gin.” Sloe, a.k.a. blackthorn, is a small tree/big shrub in the stone fruit family, and the “berries” it produces are kind of like tiny, bitter plums. You wouldn't eat sloe off the tree, but it's good for jams or to infuse liquor, that sort of thing. I didn't notice much sloe in Germany, but the plant is native to Northern Europe (among other places), whereas in North America it's nonnative and appears to be grown mainly only in the very Northeastern U.S, so it should be less surprising to find it there than here.

Appearance: Leysieffer's usual, because this is just flavored with extract.

Smell: Here's where it gets interesting! The aroma of mild chocolate is well-melded with something fragrantly fruity, sticky-moist, like a dark honey or dried-but-not-too-dried plums and cherries, the sort you bite into and find syrupy sweetness inside.

Taste: This works so well with the mild chocolate that it doesn't taste like an additive to me so much as a whole different kind of chocolate, as though these particular cocoa beans were rich and darkly fruity instead of the usual tart and bitter. Or you can think of it like many flavored truffle centers, with their orange or rum or strawberry balsamic subtle yet thoroughly incorporated. I'm having trouble describing the sloe, since it tastes rather familiar...I'm not sure why...but isn't quite like anything else, just sweet and juicy and deep, and lingering for quite a while after I finish.

Sloe + chocolate conclusion: In Leysieffer's mild base, sloe's deep, honeyed sweetness makes for a perfectly rich, mellow bar.
at 12:00 AM

Labels: 59% and under, chocolate travel, Leysieffer, other fruit