Seeds of Change 61% Cacao Dark Chocolate With Mango and Cashew 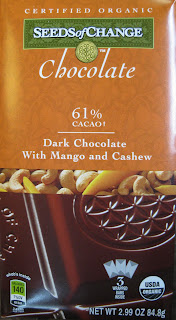 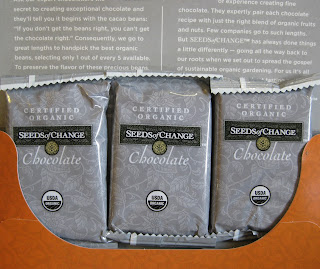 2.99oz (84.8g) in three 1oz bars
Ingredients: Organic chocolate, o. cane sugar, o. cocoa butter, o. milkfat, o. soy lecithin, o. vanilla, o. cashews, o. mango
9g sugar/28g serving (32.1% by wt.)
I bought Seeds of Change's 61% Mango and Cashew bar at the same time as the coconut bar, because I found them on sale and hadn't tried the brand before. My opinion of the coconut chocolate was mixed: I thought it was mild and fatty, permeated with a tanning-oil coconut sweetness that was too much for me but might work for others. I've used the extra in hot cocoa and had the same problem, the coconut flavor overwhelming the chocolate and making the drink taste sickly and artificial. Nevertheless I said I'd like to sample another flavor, and there's no chance that the mango cashew bar will have the same Eau de Mounds.
Corporate Info: Seeds of Change is...complicated. The company was founded in 1989 on one very well-intentioned product, organic seeds, but in 1997 sold to mega-corporation Mars, Inc., makers of everything from M&Ms and Skittles to Pedigree dog food. Despite Seeds of Change's sustainability claims, UK-based Ethical Consumer Magazine now rates the chocolate at 2.5 out of 20 on their scale of ethical chocolate consumerism. (By contrast, they rate Divine at 14.5, Lindt at 11, and Mars' own M&Ms at 1.5.) Mars says it's striving for economic, social, and environmental sustainability in its chocolate production, but those goals don't yet seem to have made it into the product. With all that's involved in the long processing chain of chocolate production, I suspect there's some good and a fair amount of bad. Your conclusion may vary.
Appearance: Like the coconut bars, the mango and cashew bars come in three individually packaged, stubby bricks. They're a light to medium, orangey brown, and a cross section reveals small pieces of chopped mango and cashews.
Smell: Fresh, sweet, and tropical. Not at all sour or pungent.
Taste: Soft and smooth with a few tiny hard, chewy pieces of mango. Quite sweet, with sweet-tart mango; cashew contributes to the overall tropical vibe rather than having any distinctive flavor or texture.
Snooty Reviewer Stuff: I definitely get the extra cocoa butter and milkfat in here, as it has the same fatty texture as the coconut bar, but the slightly tart mango and lack of coconut flavor makes that texture less off-putting. I wouldn't call it recognizably mango—it could almost be apricot or weirdly sour cantaloupe—but the fruit works as a flavor contrast, though it does stick in my teeth long after I've swallowed the chocolate. Not much more to say...this is not a complex chocolate.
Conclusion: Seeds of Change 61% Cacao Dark Chocolate With Mango and Cashew is sweet, fatty, and just okay.
at 3:41 PM