3oz (85g) bar
Ingredients: Chocolate liquor, cane sugar, cocoa butter, cream, corn syrup, soy lecithin, water, vanilla, Hawaiian black sea salt, sea salt
13g sugar/43g serving (30.2% by wt.)
This 70% cacao Trader Joe's bar is basically the exact same thing as last week's several-dollars-pricier Vosges bar, except it varies just enough (not organic cream, a sprinkling of salt on the back, higher sugar content) that Vosges clearly doesn't produce it, at least not as an identical copy. I haven't been impressed by Trader Joe's chocolate in the past, but who knows who makes it or how many manufacturers the grocer has used over the years, not to mention this is a filled bar rather than a single-origin, super-dark bar that relies heavily on its beans, so I might feel entirely differently today. It's hard to go wrong with caramel-filled chocolate. 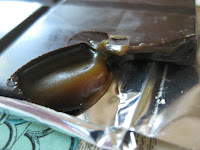 Appearance: Big, thin, flat, matte, uniformly textured, a solid, medium-dark brown. As with last week's caramel-filled treat, this thin, sharply molded bar holds its soft filling well.
(It only broke just before I took the photo above, when I caught it on the wrapper inside the box.)
Smell: Mild, slightly spicy, dried fruit, no sharpness.
Taste: This is the Bam! version of the Vosges bar, with a less interesting chocolate, just-a-bit-thicker and significantly but not unpleasantly sweeter caramel, and to my mind one major improvement, that restrained if uneven sprinkling of salt on the back that hits the tongue quickly and livens up all the flavors. Without it—as I said, it's unevenly applied—the whole package isn't nearly as interesting, because there isn't as much to the caramel or the chocolate, but most people will find this an entirely acceptable substitute for the more expensive Vosges bar.
Conclusion: Trader Joe's Dark Chocolate Bar Caramel with Black Sea Salt isn't super-complex, but it's pretty darn good for the price.
at 12:00 PM