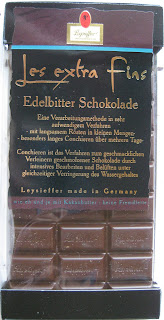 Today's Bar: In addition to all the flavored bars (and other products), Leysieffer does have an assortment of plain chocolate in various cacao percentages and origins. Today's Les Extra Fins Bittersweet is a fairly plain choice: It's not single origin and, at 61% cacao, it's only slightly darker than the 55% base of its semisweet flavored bars, which I thought might make for an interesting comparison.

Appearance: A rich, reddish brown not much different from the 55%, though I do think it has more red-orange in it. It's actually a rather lovely color.

Smell: Warm, beany but with rounded edges, nothing sharp there. Comfortable.

Taste: Texture is waxy, smooth, just a tiny bit chalky. Flavor is indeed deeper than the 55%, though the sweetness hits me first, which isn't my favorite experience in general. However, once the chocolateyness catches up, it's quite nice in an accessible way, like a bittersweet chocolate chip: a touch sour, enough bitter to taste like real chocolate, nowhere near raw but still within sight of the tree—as opposed to, say, those super-smooth, creamy chocolates that taste like they sprang up on their own in a Parisian chocolaterie. This isn't anything special, but it might satisfy some people's everyday cravings.