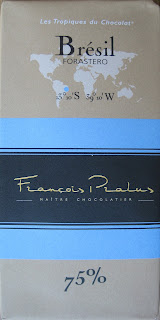 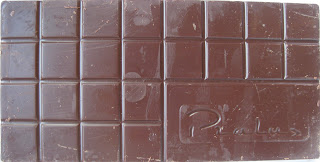 100g (3.5oz) bar
Ingredients: cocoa, sugar, cocoa butter, soy lecithin
Ages ago I reviewed François Pralus's 100% cacao bar. I so enjoyed it that when I was visiting Cacao in Portland, I decided to try one of the chocolatier's many single-origin bars, in this case Brésil Forastero (Brazil is the country of origin; Forastero is the bean variety).
Corporate Info: François Pralus's website and press kit (a pdf) give pride of place to Pralus's father Auguste, a pastry chef whose work François considers his company to be carrying on; the franchises sell both Auguste's praline brioche (the “Praluline”) and François's chocolate. François Pralus processes all of its chocolate from bean to bar in its factory in central France, and while it sources the beans from all over the world, it now owns one plantation on an island off the coast of Madagascar. There is no indication that the beans are fair trade or organic, and this Brazilian bar obviously didn't originate from Pralus's own plantation.
Appearance: I rather like the look of François Pralus's bars; there's something pleasing about the symmetry of little squares and the large block with the Pralus signature. Otherwise, the chocolate is a nice reddish brown, with a slight gloss. Mine is also a little banged up.
Smell: There's not much smell but it's warm, reminding me of something like nutmeg, hazelnuts, and crème fraiche (like sour cream, but richer and not as tart).
Texture: Very rich and creamy, with some bitterness and a touch of acid. Nothing really distinctive, but not especially mild either. For me this chocolate is all about the creamy texture.
Conclusion: François Pralus Brésil Forastero is rich and creamy, with a little bitterness for complexity.
at 4:29 PM