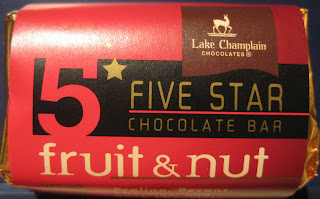 Corporate Info: I rather like Lake Champlain because it makes my favorite cocoa powder (so far), and because the passionate, creative mind (at least at that time) behind the Five Star Bars is profiled in Candyfreak, a book about a few remaining small businesses in the large-corporation-dominated chocolate world. I'm not sure there's a lot to say about the company otherwise: It's based in Vermont and about 30 years old...not organic or fair trade or whatnot, but if you're in the U.S. you can buy them and support a relatively small American company. (Bonus: Combine a factory tour with a trip to the nearby Ben and Jerry's factory and seriously, that's a good time right there.)

[Update/correction 4/2/12] Lake Champlain does produce a few organic items and is a member of the World Cocoa Foundation, which claims to be working toward various positive aims (focusing on child labor and so on). However, as the WCF includes many of the world's largest chocolate manufacturers, visions of happy workers sustainably producing cheap chocolate to fulfill the world's demand may be a bit of wishful thinking, at least for the time being. 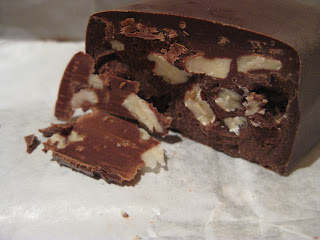 Appearance: Lake Champlain's Five Star bars are all stubby, chunky, and unassuming. This one is mildly reddish-brown and just a little glossy. A cross-section looks like ganache mixed with whitish pecans and not a lot of fruit.

Smell: Sweet dried fruit and nuts, though that might be cheating with this bar. Very pleasant, which is to say nothing pops out.

Taste: The texture in these bars is fatty-creamy, sort of like a less extreme version of a Lindor Truffle (but with actual cocoa butter instead of palm and coconut oils), plus inclusions: Crunchy, low-flavor nuts, dried fruits contributing low-impact complexity and intermittent chew, and a good amount of fatty filling. Since there's hazelnut paste, they're trying for additional flavor and creaminess rather than just nut pieces, and I am getting some minor hints of Nutella that probably add to the fruit/nut vibe. The chocolate feels like an afterthought, but it's really not, because it's well-matched in sweet-tart profile, just not particularly intense.