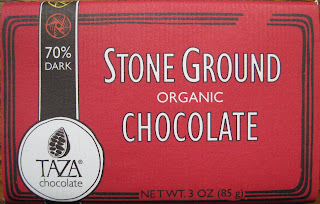 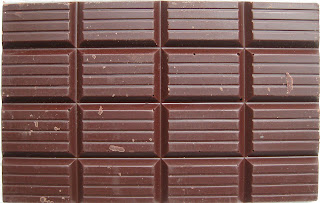 3oz (85g) bar
Ingredients: Organic direct trade cacao beans (Dominican Republic), o. cane sugar, o. cocoa butter, o. vanilla beans
Corporate Info: Taza Chocolate is pretty lovely. The bar I'm holding comprises only organic ingredients, sources its cocoa beans using a variation on fair trade principles called Direct Trade, was made in the U.S., and is wrapped in recycled paper. What Taza produces is interesting too. Rather than being smooth throughout, the chocolate is made from stone-ground cocoa beans and not conched, both of which make for a gritty chocolate with discernible sugar crystals. In addition to bars, Taza produces Chocolate Mexicano Discs that are just sugar, cacao, and flavorings as well as baking chocolate and other items, including a neat Chocolate Mexicano Extract.
Appearance: Reddish.
Smell: Rich and complex, beany, fresh. “Together”: Yes it's complex, but there's nothing that stands out as particular sharp or dominant.
Taste: The texture is dense with a fine graininess; it reminds me of homemade fudge—the crumbly kind, not the soft kind you often buy in tourist shops. Flavor is indeed fresh, with a pleasantly tart beginning that fades into a light bitterness, like a light red wine. To my taste the chocolate and sugar balance each other well, as more sugar would be too sweet and less would make it just sour. I'm not sure I'd want this tart flavor profile every day, and for what it's worth, ten minutes later my tongue still tastes bitter...but it's very good, and I'd like to try some of Taza's other products.
Conclusion: Taza Chocolate 70% Dark Stone Ground Organic Chocolate is tart and complex, with interesting flavor and texture. Worth trying.
at 12:00 PM 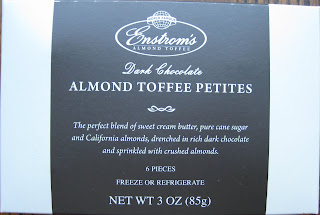 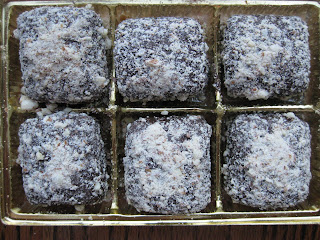 I recently visited a friend in Grand Junction, Colorado, home of Enstrom Candies and its “World Famous Almond Toffee”. We checked out their factory store, which carries not only Enstrom's chocolate covered toffee but also behind-the-counter chocolates, an assortment of boxed confections, some fun candies from other companies, ice cream, and a few baked goods. I bought myself a tiny box of their dark chocolate toffee “Petites,” some imported salty licorice, and a few interesting confections like dark chocolate mints (basically fancy Andes) and a tasty chocolate-dipped coconut caramel. Aside from the house-made toffee, prices are fairly reasonable; the confections aren't super-upscale molded and printed confections with creative fillings but rather homey dipped turtles and chews. 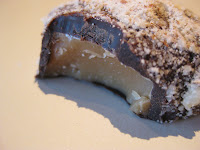 As for the Toffee Petites, they're fine but not my personal ideal. FYI, Unless you're the type who eats a Snickers in under a minute, the fat “petites” are really two or three bites. The crushed almonds on top don't stick well and end up getting everywhere. The dark chocolate in the coating is fairly forgettable, is thicker than I would have wanted, and tends to flake off the toffee, so it mostly gets in the way. I'd prefer a thinner coating of chocolate, as in Enstrom's regular toffee product (at least that's how it looks in the picture), and of course I would like it to be darker. The toffee nuggets, though, are pretty darn good, all butter and sugar. Next time I would eschew the Petites and go for regular toffee.
Enstrom has three stores in the Grand Junction area and two in the Denver area. If you're visiting Colorado and have a hankering for sweets, you might find what you're craving at Enstrom Candies.
at 12:00 PM

This smallish house-brand bar from Seattle's Chocolopolis has no label other than the store's, so I don't know anything about it, including the ingredients, how dark it is, or what brand they use, though it includes "vanilla sea salt." I was in there anyway and have been wanting to try more salt-topped chocolate, so there you go.


Appearance: Smooth, medium-brown, and blocky.
Smell: Subtly fruity, not at all intense. Maybe dried fruit, not caramelized like raisins, more like dried cherries or dates, or a light honey.
Taste: They know what they're doing over at Chocolopolis. This is a pretty dark chocolate, with a percent cacao somewhere in the mid-70s (hope I'm not wrong about that!), and it's well balanced: not over-roasted or weirdly sweet or challenging with smoke or sourness or any other pungent flavors. A very medium bar with just enough salt to make things interesting.
Because this isn't a very sweet bar, it doesn't have the same salty-sweet, caramelized vibe as salt caramels or caramel corn (though I love those too); to my mind, the salt enhances the flavor of the beans here, not the sugar.
Conclusion: Chocolopolis Dark Chocolate with Sea Salt is very well balanced. I'd be curious to find out whose chocolate they use for their house bars.
at 12:00 PM 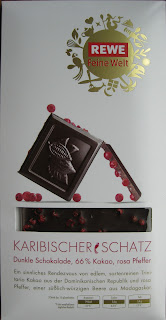 100g bar
Ingredients: sugar, cocoa mass, cocoa butter, pink peppercorns, soy lecithin
The last two of my German chocolate bars share an inclusion uncommon in the U.S, pink peppercorns. Pink peppercorns come from two non-pepper plants from Central and South America, and while I've seen them here in spice shops and peppercorn mixes, for whatever reason they seem to be more popular in Germany. One of these bars was my first random chocolate buy, a funky flavored, inexpensive store brand from a big chain supermarket called REWE (“RAY-vuh”) that was near one of our hotels. Later, when I was selecting flavors at Leysieffer, I decided to buy one of their rosa pfeffer bars for comparison's sake. The REWE bar is 66% cacao, and the Leysieffer is their usual 55%.
Both bars mostly smell like chocolate, but they certainly taste like more! The REWE bar is thin, with crispy, slightly chewy peppercorns. The chocolate is pretty mild, of the creamy/chalky variety, and the peppercorns have a little pepperiness, but it's not strong—herby flavor, no bite. The Leysieffer chocolate is thicker, sweeter, and waxier, and its peppercorns have more spice and maybe more crunch to them as well. FYI, the shiny, crisp peppercorn skin doesn't really taste like anything; it's the crunchy little UFO-shaped seed inside that has the bitter, resiny flavor that feels like a super-light cousin of spicy black pepper or numbing Sichuan peppercorns.
For me, the REWE bar was kind of insipid, and the Leysieffer chocolate's sweetness didn't do anything for the herby peppercorns the way they did for elderflower and rose. Contrary to expectations, I ended up finding pink peppercorn chocolate boring, and I wonder if I wouldn't like this better with a darker chocolate and maybe a small amount of another type of peppercorn, upping the intensity of both chocolate and inclusion. For what it's worth, my co-taster thought the Leysieffer was pretty good.
Pink peppercorn + chocolate conclusion: For me, the mild chocolate and complex but relatively quiet pink peppercorn flavors just weren't enough, but I could see how others might like the combination.
[Note: I traveled with these and also moved them around a bit before opening them, so both the chocolate and peppercorns are more broken than when I first bought the bars.]
at 12:00 PM

Labels: 59% and under, 60-69% cacao, chocolate travel, Leysieffer, spices
Newer Posts Older Posts Home
Subscribe to: Posts (Atom)
Welcome to Dark Chocolate Diary! I'm Molly D, and I review dark chocolate bars and confections. I like small companies, fair trade, and organics. I like bars that aren't too sweet and flavorings I can really taste. I like to use the word "balance." And I'll try anything once.