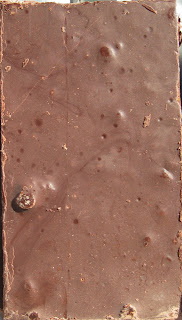 Ingredients: Cocoa, sugar, crystallized orange peel, cocoa butter
Chocolate with orange is not a novel flavor combination. Christmas wouldn't be the same to many Americans without the interactive, decadent fun of a Terry's chocolate orange. Theo's Classic collection takes a more restrained approach with a dark chocolate bar infused with orange oil. And for all out orange flavor, many confectioners offer chocolate covered sticks of orange jelly or glaceed orange peel—sometimes chewy, sometimes soft, but always more syrupy candy than sultry chocolate.
So what's so special about Claudio Corallo's take? Well, it's just different. For starters, Claudio Corallo's bars don't look like the usual, orange or otherwise. The finish is dull, not glossy, and the bars don't appear molded but rather spread thin and cut into rectangular slabs. (They also come two slabs to a “bar” or, in the larger package, as several slabs nestled tightly in a cardboard box.) There's something appealing about a matte finish and an imperfect shape, something rawer and closer to the bean than what's apparent from the candy-gloss surface of a precisely molded product. What's more, the bars smell like the tropics, a heady perfume of flowers and fruit, nothing spicy or caramelized or Christmasy about them.
Back to the orange: Claudio Corallo is using 75% cacao, and for what it's worth, there is no vanilla or other flavoring besides the orange. The soft crystallized orange pieces, lightly scattered within the bar, are more slightly bitter orange than sugar; they're not so much a tangible orange candy as a subtle flavor element. I found the chocolate and orange to be inseparable, so I will describe them together as sweet and orange-fragrant, with the barest touch of tang and a long finish. The flavor is not bitter or especially intense, but I also wouldn't describe it as mild, because it doesn't have the creamy, muted smoothness of some bars. It's treading the line between raw and finished, tropical bean and mellow candy. I find it fairly sweet, so to my taste I could have used a darker chocolate, but I imagine it's plenty dark for most people and I do think it strikes a good balance.
As I've said, this stuff ain't cheap, but it's a very interesting way to calibrate your palate, explore the boundaries of what chocolate and citrus can be, and transport yourself to the tropics in a way that American and European chocolates usually don't.
Conclusion: Claudio Corallo's Chocolate Laranja bar may not be what you always want from your chocolate and orange, but it's worth at least one visit—and a few dedicated minutes to sit, savor, and reflect.
at 2:29 PM

We'll Be Back After the Break

I have a whole post lined up for today, but I misplaced my camera cord and can't download any photos. Taking a mini hiatus until I figure out what to do.

I was perusing Seattle Weekly's annual Best of Seattle issue a couple weeks ago when I zeroed in on the category “Best Place to Taste Chocolate,” and found that their pick surprised me: Claudio Corallo, a store I'd never heard of. I was even more intrigued when I visited the company's website, because all of Claudio Corallo's products are 70% cacao and higher—score!—and I vowed to visit the Seattle flagship store post haste.
On the weekday afternoon when I pulled up to Claudio Corallo, I was surprised to see that the shop was full of people. It turned out that a group from a nearby business had come in for a semi-private tasting, and I'd barged in mid-presentation. The proprietor was rather occupied but also gracious, and she suggested I come back in ten minutes, by which time most of the other customers had left and I was able to try samples and ask questions.
Let's get something out of the way: This is expensive chocolate, more than $4 per ounce for a single bar. But that's not really bad news, just an indication that it's a whole different product from most of the other bars you see on grocery store shelves. Most of us don't eat at three-star restaurants frequently, but on the occasion that we do, we appreciate the effort and artistry that makes it something our Wednesday night stir-fries are not. It's this perspective from which I approach pricey, high-quality chocolate.
The company
Claudio Corallo the person is a gentleman who operates his own plantation and chocolate processing facility on the islands of Sao Tome and Principe, off the coast of West Africa. His operation is essentially dirt-to-bar, because it involves everything from farming all the way to choosing sugar and inclusions. Claudio Corallo the company imports Corallo's finished products and sells them in a selection of retail stores and online. The current Seattle flagship location opened late in '09, though online reviews indicate a previous storefront in another part of town.
The tasting experience
When I first stopped in at Claudio Corallo, I watched as the organized group ate every offered sample excitedly and, at the conclusion of the presentation, immediately began dropping $20s on the items that had impressed them the most. It's a vivid illustration of why every high-end chocolatier ought to offer plentiful samples: Sampling done right can engender goodwill, encourage informed questions, and produce repeat customers who bring friends. There's no better way to up-sell than to have customers come up with the idea themselves, and on a personal level, if I'm going to pay dearly, I want to walk out with something I absolutely love.
Claudio Corallo offers a more guided tasting than Theo Chocolate. Rather than piling pieces up for unlimited self-service, Claudio Corallo's proprietor stands behind the counter with a pair of tongs, describing the choices and doling out slivers of bars and confections. The options, slightly broader than what's listed on the website, include a 100% chocolate bar; several other high-cacao options; an 80% bar with coarse sugar for textural variation; bars with orange pieces, ginger pieces, or nibs; chocolate-enrobed coffee beans or candied ginger; loose nibs; whole roasted beans; and a couple more complicated bars that involve nuts, dried fruit, and spices combined and sprinkled on top of chocolate. Additionally, the store has partnered with a nearby restaurant to occasionally offer chocolate pastries and other desserts.
I didn't want to spend too much, and so was left to narrow down among several favorites. I put off buying the whole beans, though I loved them: A new experience for me, they were nutty-crisp and not nearly as intense as I had expected. Similarly, I enjoyed the nib bar's contrast between the nibs' texture and near-airiness and the sweetness of the chocolate that surrounded them. I finally bought a box of chocolate-covered coffee beans and the outstanding orange bar (reviews to follow), and definitely plan to stop into Claudio Corallo again.
at 12:55 PM 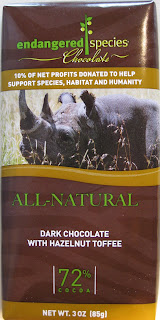 
My favorite candies pre-sugar restriction were Sour Patch Kids and the like, super-sour chewy wads of sugar that I frequently craved and often purchased en masse from pay-by-weight mall candy stores. In the long run, though, the sugar, corn derivatives, and artificial colors and flavors were tangibly empty calories: I would scarf them mechanically until I realized I'd eaten the whole bag, and then I'd feel a bit ill. On the other hand, caramels and toffees, while not my treats of choice, actually satisfied. One or two pieces provided buttery richness and gave my teeth a workout, and I would think, “That was tasty, and I've had enough candy.” Now imagine me in my current state, deprived of creamy sweets, and you're sure to understand why I occasionally pick up Endangered Species' toffee bar. It's usually not expensive and sometimes even on sale, and it slides below my 1/3 sugar limit despite including candy as an ingredient. I appreciate that it's an option.


The inevitable downside of this bar is that it's not all that good. Don't get me wrong, it's not terrible or I'd stop buying it, but it doesn't live up to the name. The chocolate is Endangered Species' usual simple sweetness (I'm starting to wonder if using exclusively beet sugar affects the taste in some way); I keep detecting an odd cooling sensation, like a very subtle mint or menthol; and the toffee is undetectable as fragrance or flavor, its presence limited to the texture of a few small crunchy crystals. And I won't even touch on the promise of hazelnuts. 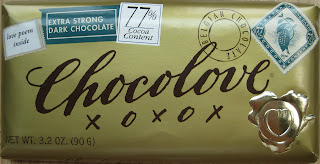 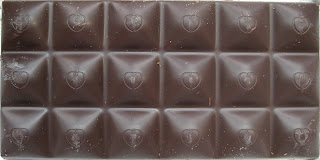 3.2oz (90g) bar
Ingredients: Cocoa liquor, sugar, cocoa butter, soy lecithin
6g sugar/30g serving (20% by wt.)
Chocolove prints love poems on the inside of its chocolate bar wrappers, a wholly unnecessary but cute gimmick. The poem on today's Extra Strong 77% wrapper is from Twelfth Night, which caught my eye because I've just been watching a TV series that revolves around a Shakespeare festival and am about to attend such a festival myself. Thus, I'm giving Chocolove points for (arbitrary and subjective) topicality.
Fortunately, the bar is pretty good, too. It's a glossy dark brown of the down-the-middle brown brown sort and molded into Chocolove's usual pillow-topped shape, and it smells like dried fruit, which isn't my favorite scent on its own but often heralds a flavor I will like. In this case, it's low on the bitter/sour index and high in smooth, mild intensity, with a texture that is waxy (seemingly a personal preference of mine) and just so slightly gritty-chalky in a nice way. Nothing about it wows me, but it does have the complexity that I find necessary to any bar I'll buy more than once, and I usually find it for a reasonable $2.50-$2.75 in my local stores.
Conclusion: For general snacking, Chocolove Extra Strong Dark Chocolate 77% Cocoa is a great choice: Reasonably priced, easy to find, and with a mild medium-dark flavor profile.
at 12:22 PM

Labels: 71-79% cacao, Chocolove, just chocolate
Newer Posts Older Posts Home
Subscribe to: Posts (Atom)
Welcome to Dark Chocolate Diary! I'm Molly D, and I review dark chocolate bars and confections. I like small companies, fair trade, and organics. I like bars that aren't too sweet and flavorings I can really taste. I like to use the word "balance." And I'll try anything once.