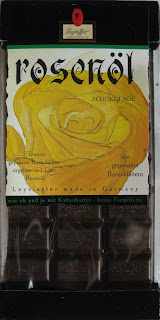 100g bar
Ingredients: Sugar, cocoa mass, cocoa butter, soy lecithin, “spices,” rose oil extract
Today we're back to Leysieffer for another odd-to-me flavor, rose. Like last week's cardamom bar, this one has a big ol' fragrance, smelling just like rose-scented lotion, perfume, and of course roses, plus a little chocolate underneath. That's how it tastes, too, albeit somewhat less overwhelming. It's not a bad combination, actually, heady rose and mild chocolate melding into the same sort of heavy sweetness that polarizes people who use perfumes and home fragrances—you'll love it or hate it, depending on how you feel about rose in general.

Also, I suspect Leysieffer's relatively mild dark chocolate is a better match for rose than a darker, more intense chocolate would be, as the latter's usually sharp edges might compete with the powdery floral. As with the elderflower bar, though for totally different reasons, Leysieffer's 55% base is a good pairing. 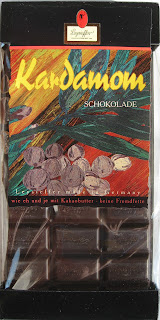 100g bar
Ingredients: [I forgot to write these down, but I believe they were just sugar, cocoa mass, cocoa butter, soy lecithin, and cardamom.]
Last week I introduced Leysieffer; today's question is about the combination of chocolate (in this case a mild, somewhat-dark chocolate) and cardamom. I usually associate cardamom with Indian curries, where their cool, spicy intensity is combined with a host of other spices, so I don't spend a lot of time with just cardamom. This should be interesting!


Here's a little background on cardamom: Cardamom is related to ginger, but the spice we use in cooking is a seed pod, not a root, so you won't notice any similarity aside from strong flavor. Two varietals are cultivated widely, one small and green and one bigger and brown. The oblong seed pod or ground seeds are used in many different types of preparations—food, drink, medicine—in India, the Middle East, other parts of Asia, and some Northern European countries (presumably a colonial remnant). I couldn't tell you which type is in this chocolate, but the picture on the front is of stylized brown seed pods.


So, cardamom in chocolate.... It smells great: bright and spicy. Here the cardamom is front and center, and the chocolate is more of a foundation, filling out the scent's complexity. The flavor is similar, not shying away from the cardamom at all, with the chocolate playing backup. I'm not sure I'd say cardamom's piney (wikipedia says “resinous”) flavor is a total natural with chocolate, but it's not a total mismatch, and to be fair I'm also not accustomed to cardamom as a standard sort of ingredient.
Cardamom + chocolate conclusion: For cardamom lovers and adventurous eaters.
at 12:00 PM 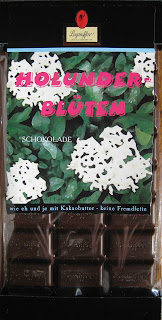 100g bar
Ingredients: Sugar, cocoa mass, cocoa butter, soy lecithin, elderflower extract
Leysieffer is one of those brands I mentioned in this post that has its own shops, and I saw a few of them in various cities. Unbeknownst to me, the place where I finally bought several bars, an off-the-tourist-path, small city called Osnabrück, is also the place where Leysieffer began in 1909 (though they didn't begin working extensively with chocolate until 1936), and the production facility sits outside the city today. The history isn't all that interesting, mostly for the pretty positive reason that Leysieffer is still owned by the family that started the company; it just grew and developed. At this time there are 16 chocolate shops and six “bistros” as well as a lot of “partner shops” that I'm guessing sell Leysieffer products along with other brands.
What made Leysieffer so exciting to me is that it uses all sorts of interesting flavors and inclusions, like Darjeeling tea, poppyseed, and ground black pepper. Unfortunately only a few plain bars are verydark, so I compromised and bought several super-keen flavors in Leysieffer's 55% cacao dark chocolate base. I'll review them over the next few weeks with an eye toward how well their unusual flavorings work in chocolate.
Today's bar is Elderflower (Holunderblüten). You may or may not have tasted elderflower before, as it's not used much in the U.S., but it's not uncommon in parts of Europe, and on a walk in Germany I was able to smell a cluster of the tiny flowers on a nearby tree. (Note: Elderflowers come from the same plant as elderberries, which are also found in various food preparations. If you're looking for the flavor I'm discussing here, make sure you've found the flower!) How to describe it...well, I bought a bottle of “elderflower drink concentrate” from Ikea a while back, on a whim. That syrup also includes sugar and citric acid, but aside from the sweet-sour flavor of those two, the syrup has a lovely floral fragrance that isn't super-perfumy like rose but more light and refreshing, an easy match for candy.
On to the chocolate. It sure doesn't smell like anything aside from chocolate, but it tastes quite nice! For starters, Leysieffer's dark chocolate base is very mild, sweet but not too sweet, more waxy than chalky—not interesting on its own, but a good match for delicate flavors like elderflower. The elderflower is a great addition...I keep wanting to use words like nice, lovely, and delightful, which indicate a sweet, refreshing, light treat, nothing challenging or cloying.
As in the syrup I own, the elderflower works well in something sweet, which makes the flavor more than just flowery. Can you imagine a sugar-free strawberry, peach, or cantaloupe? Sweetness helps luscious fragrance become fruity flavor, and I think it really contributes to what elderflower does when combined with chocolate.
Leysieffer's 55% dark chocolate conclusion: Mild, not overwhelming in any way; a good base for light flavorings.
Elderflower + chocolate conclusion: If used well—not too much, not too little, in the right base—elderflower is floral, light, and refreshing in chocolate.
at 1:13 PM

Coppeneur and zotter [sic] are both companies I'd never seen before that make a ton of neat-sounding bars, but since it was early in the trip and I didn't want to commit much money or luggage space, I chose just one of each, Coppeneur's Black Beer “Black Abbot” (Schwarzbier Schwarzer Abt; click the link, then “English,” “Products,” and “Praliné Chocolates” to see the varieties in the right-hand column) and zotter's Almond with Grappa Raisins (Mandel mit Grapparosinen). Though I didn't notice it at the time (it is in fact mentioned on the wrappers), both of these are ganache-filled truffle bars rather than chocolate with inclusions.
A few brief notes on the companies: Coppeneur is German and makes not only filled bars but also single-origin chocolate, flavored bars, confections, a few organic (bio) items, and so on—and if you'd like to order from Coppeneur, this Canadian importer claims to be able to hook you up. What I saw in-store was maybe a dozen of the 30 filled Praliné bars, which all come in neat flavors like Blue Poppy Seed and Wasabi & Algae, and I figured Black Beer was interesting and a fun memento of Germany. zotter is Austrian and entirely organic and fair trade. The aesthetic is goofy and fun and the offerings are even more varied than Coppeneur's, not only bars and confections but also ganache in syringes, pink and lilac “gay and lesbian chocolate,” and chocolate liqueurs. Again I saw only, say, 15 of what is a much larger product line of “hand scooped” layered and coated bars. The fillings range from Pink Grapefruit to Port Wine, Celeriac, and Truffles, and with relatively few choices I went with Almond with Grappa Raisin. Looking at Coppeneur's and zotter's websites now, I'd love to try more from both companies.
Coppeneur Black Beer “Black Abbot” 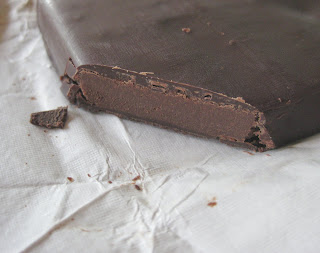 The thing about ganaches/truffles, in bar form or not, is that the fat in the cream and/or cocoa butter mutes flavors; in my experience, the filling is usually super-rich and otherwise relatively subtle. I like big old punches of flavor in my chocolate (perhaps due to my American/Hawaiian palate), and I'm still learning to appreciate nuance.
That's what's going on here: mild dark (70%) chocolate encasing a subtly complex, stiff, fatty center, and I'm having trouble picking out the flavors. Coppeneur lists the tasting notes of its bars at the bottom of the label; here you can see this bar categorized as “spicy” and “sharp” (the site I use translates würzig “full-flavored” as well as “spicy”), but I'm not sure I'm able to taste these. Just think of them as complex and subtle.
What can we learn about beer-flavored chocolate from it? Well, maybe I'm imposing based on the name, but I'd venture that while this isn't at all bitter or alcoholic, it is sort of malty, like the flavors you get in beer after you get past the bitterness, and that's kind of fun.
zotter Almond with Grappa Raisins 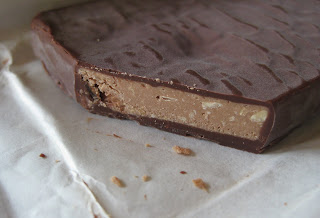 This bar has more prominent flavor than the above, not to mention some variation in texture. With the outside's sharp corners I half expected it to contain wafers or something, but it's all truffle, only not smooth truffle: The ganache is blended with ground almonds, with an occasional tiny raisin resting along the bottom. The flavor is creamy, nutty, sweet, and a little salty, with the grappa-soaked raisins making things interesting. Everything in between is fatty richness, but with all those tiny nut pieces and moist raisins and that pinch of salt, it's not like eating a piece of butter. As for the grappa, I pulled out a piece of raisin alone and tried it, and I think it gave me a little more than the usual caramel-fruit flavor, but it was hard to tell.
What can we learn about inclusions from this bar? Fruits and nuts can be intriguing, in both texture and flavor! The ground almonds, raisins “layered” at the bottom, the addition of salt that just barely reminded me of a Reese's peanut butter cup—they all made this a pretty neat bar, and I'd like to try more from zotter.
at 12:00 PM

Labels: 70% cacao, almonds, chocolate travel, Coppeneur, fair/direct trade etc., filled bars, organic, raisin/currant, zotter
Newer Posts Older Posts Home
Subscribe to: Posts (Atom)
Welcome to Dark Chocolate Diary! I'm Molly D, and I review dark chocolate bars and confections. I like small companies, fair trade, and organics. I like bars that aren't too sweet and flavorings I can really taste. I like to use the word "balance." And I'll try anything once.