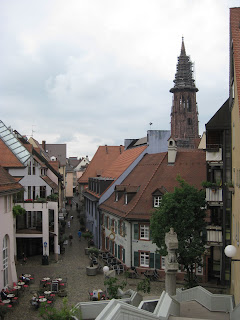 [Note: This post is virtually research-free, just what I noticed walking around in several cities, mostly in busy and/or touristy areas.]
When I was planning a this trip, in the back of my mind I thought “look at all these places known for chocolate—Belgium, France, Switzerland—and here Germany is right next door!” But I got a bad cold on the way over, and between that and jet lag I totally forgot about my favorite sweet treat.
Then I was eating dinner on a square in Freiburg and spotted a sign saying “Chocolate Shop” (or perhaps just Schokolade) and ventured in, where I found a pretty glass-topped confection counter and a variety of bars. Some brands I'd seen before, but others were entirely foreign (ha!) and intrigued me with their wide range of neat-sounding flavors. I didn't want to add much to my load early on, so I bought a couple items and kept moving. But from that point on, I found chocolate all over the place.
There is simply more chocolate in Germany: more shops, more flavors, bigger chocolate sections in stores. I stumbled upon chocolate shops all over the place, and while most of my trip was spent in the treat-heavy tourist parts of towns, in a larger city like Köln I wandered past at least one dedicated shop in every busy neighborhood I visited.
In the U.S., I can find Hershey's anywhere, but most of it is peanut/nougat/wafer/caramel candy bars, not dark chocolate. Further, because small producers aren't carried in many supermarkets (though I've had good luck with Whole Foods) most of what's available is made by the same few companies. If I want to go beyond that, even a good chocolate city like Seattle only has so many chocolate-specific shops. And we're just so far from other parts of the world: I might see product from German companies like Hachez in the U.S., but I saw entire Hachez stores in Germany. Unsurprisingly, European stores offer greater access to European chocolatiers.
So there's a lot of chocolate in Germany, and with such bounty it's not hard to satisfy one's personal chocolate preferences. I saw and sometimes bought confections (Pralinen), cheap chocolate, expensive chocolate, single-origin chocolate, organic/fair-trade chocolate, dark or milk or white chocolate, chocolate with funky flavorings like alcohol or spices or florals, and so on.
Of the flavorings, some followed familiar lines, like nuts and raisins, while others were more unusual or particular to the area. Later I'll show you some bars whose flavorings I'd never seen here but were not uncommon sights in German candy shops. 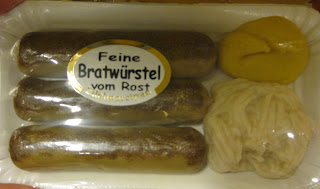 This isn't chocolate, but it is candy, and it entertained me.
Still, you won't find a huge chocolate selection in every corner grocery. The selection at supermarkets is a lot like it is here, which is to say there's a decent amount but it's mostly big brands like Ritter Sport and Lindt (often at a good price, though) and perhaps the store's own label.
So where to go? The photos from my previous post on Germany were taken in a large department store that had a huge chocolate selection on the lowest level, and I wish I'd spent more time there than the few minutes I had before running to catch a train.
At least as useful are the aforementioned chocolate shops, which are either storefronts for a specific brand or just small, independent (as far as I could tell) shops with bars and confections and often hot cocoa; those variety shops often carry more pricey options.
Much of the not-so-good stuff we see in this country applies internationally as well. For example, stubby purple Milka and famously prismatic Toblerone, both formerly Swiss, are now made by good old Kraft. Similarly, independent stores are being replaced by chains, which didn't make the chocolate any less tasty but decreased the level of fun surprise—cute new shop, same old shtick. And such a chocolate-loving country likes to flavor foods with “chocolate” that might involve some artificial (that is, not chocolate) ingredients, as in the sugary chocolate syrups we had over ice cream. I guess even a relative chocolate Mecca deals with the usual economic and social pressures, but giant duty-free Toblerone bars seem a little less special now, you know?
A few other quirks:

One of Germany's most endearing culinary treats is going to an Eiscafe, an ice cream shop with cheap cones to go or expensive, elaborate desserts you eat at sidewalk tables. The biggest shops had a couple dozen flavors at least, among them several different chocolate options, and my favorite was richly dark brown Zartbitterschokolade. (I also saw Zartbitterschokolade labeling some dark chocolate bars.) I don't often see very dark chocolate ice cream in the U.S., and it was a fun way to combine my dark chocolate habit with the joys of visiting an Eiscafe.

Anyone who's traveled internationally will have noticed that the same products we see at home sometimes show up there with different packaging and formulation. I was pretty excited when I came across this version of a discontinued favorite, but that extra chocolate syrup between the mousse and coating just didn't do it for me. Schade.

Up next: A peek inside Köln's Schokoladenmuseum—yes, a whole museum of chocolate!
at 12:00 PM