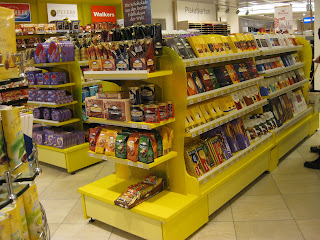 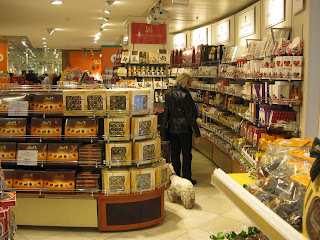 This, my friends, is a view of just part of the chocolate section of a department store in Bremen, Germany. I'm back from three weeks traveling through the country, and while I certainly didn't go just for the chocolate, I was frankly overwhelmed by the options Germany presents. I found confectionary shops all over the place, saw wide ranges from companies I'd only glimpsed in the US, visited a chocolate museum, came home with nine bars, and wish I'd bought more.
So what to talk about on the blog? I figure in this economy most people won't be hopping a plane to Europe, so I don't want to bore you with detailed reviews of chocolate you won't find in the U.S. Instead, I intend to start by posting general observations about chocolate in Germany, big or little things that surprised me or otherwise were different than what we see here. Then I'd like to write about the museum, which has a partnership with Lindt but nonetheless addresses other companies and the morally complex history of chocolate production and marketing, and—not at all controversial, but still cool—how chocolate is made, with a working small-scale assembly line. Finally, I think the bars I chose to review are interesting because they're all about the inclusions and flavorings, ones I have rarely or never seen in the U.S.; how well will chocolate pair with florals, or spices, or even beer?
While I work on these posts, you'll see some pre-scheduled reviews I wrote before I left. On that note, I want to apologize for the glitches over the last few weeks. I set reviews to publish weekly and see now that the first one isn't there, but I received a now-deleted comment on that post so it must have gone up at some point, and Blogger still claims it's “scheduled” for 5/12. I also had less internet access than I'd anticipated, which made moderating comments difficult. Thanks for bearing with me!
at 3:51 PM