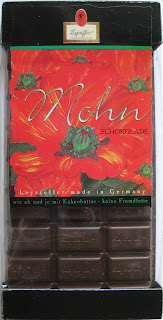 Today's Bar: Chocolate and poppy seeds! I noticed more poppy seed in Germany than here in the US. We're not talking on pizza or anything, but anyone familiar with hamentaschen has tried poppy seed in desserts of German origin, and I saw them in the odd pastry or bagged for sale with other nuts and seeds. I don't know if Leysieffer has included them whole or ground or what, but I guess I'll find out.

Appearance: On the outside, this looks like any other Leysieffer bar, but a cross section shows tiny white flecks. I think of poppy seeds as black, so either these are magically different or it's what you get when you break one. How about that.

Smell: I think just chocolate? If there's something more there, it's not obvious to me.

Taste: Man, I don't know. It mostly just tastes like chocolate, but with a slightly gritty (not sand-like, something softer) texture. These poppy seeds are either ground/broken up or really easy to chew, leaving little bits hanging around in your mouth as an aftertaste of sorts. Not sure about any particular flavor, though my sometimes co-taster claims it “tastes like poppy seed.” “What does that mean?” [Long pause.] “I don't know, poppy seed?” Given how low-key this is—just a light texture as far as I can tell—I'm not sure why anyone would search it out. Maybe people who eat a lot of poppy seed products become sensitive to their subtle flavor, or buyers just want that texture?

Poppy seed + chocolate conclusion: Underwhelming, but fine. I'd like to try something with a higher poppy seed content, or even a filling of poppy seed paste, as perhaps that would emphasize what the ingredient has to contribute to chocolate.
at 12:00 AM