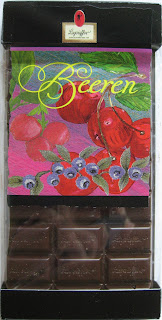 Today's Bar: Berry. Ordinarily I wouldn't have selected this from Leysieffer's more intriguing choices, because we in the U.S. see so many “mixed berry” drinks, yogurts, candies, and so on. The difference is that this bar isn't our lovely but common strawberry-raspberry-blackberry; instead, it's blueberry, which is popular here but not in chocolate; cranberry, which we mostly associate with Thanksgiving and plain “craisins”; and sour cherries, which we usually see only in pies but are very common in German jams and desserts. That hit my “novelty” button, so I went with it. 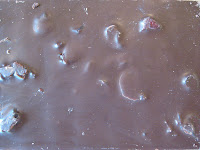 Appearance: Unlike the other Leysieffer bars I brought home, this one has large, irregular chunks visible under the chocolate on the back and revealed in cross-section.

Smell: Basically just plain chocolate, which makes sense given that the berries are intact. 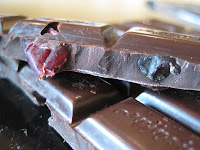 Taste: Flavor is sweet chocolate plus sweet, just slightly tart berries, and texture is Leysieffer's smooth, slightly waxy base with chewy, moist chunks of whole berry; individual bites are likely to be mostly chocolate with a little fruit for additional texture and flavor. As I've said before, I think Leysieffer's 55% cacao base is a fairly ideal match for more ethereal flavors like elderflower and lavender, but here it doesn't work for me, and there's a lot of it. The dominant, sweet chocolate and rather sweet berries prevent me from appreciating the three particular fruits included here, reminding me of why I love Green & Black's cherry bar, with its darker chocolate and plentiful, sweet-sour fruit. I'd like more fruit here, but mostly this is an issue of what the eater considers “balanced”: For me, the sugar here is getting in the way of the rest of the experience, though for others it may be exactly right, making this a satisfying bar they want to return to again and again. So it goes.

Cranberry + sour cherry + blueberry + chocolate conclusion: Inconclusive, since I couldn't get past the sweetness to really appreciate the fruit.
at 12:00 AM